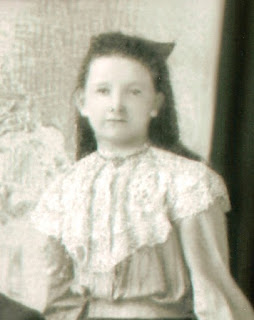 This lovely little girl with the lace on her dress is Georgina Watt Moir Aiken, sister to my paternal grandmother, fifth child of my great grandparents, David Aiken and Annie Beveridge.

This is her death notice from the Westerly Sun, Westerly, Rhode Island located by fellow researcher, Rosalie. We know from this newspaper that Georgina died before her husband William H. Pill and that she lived at 54 Oak Street in 1953 and that she is buried in River Bend Cemetery in Westerly. 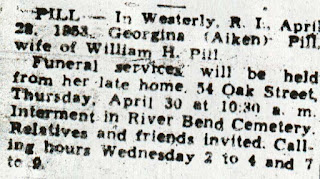 This gravestone was erected by a family member of her first husband, Archibald Beattie. They were divorced. Archibald and Georgina had six children together.

Her second husband isn't named on her stone, is he? Rosalie told me why and it makes sense. Good thing I knew something about this when I went looking for it.

It's a prickly situation when a woman's gravestone doesn't match her history. Even her year of birth is incorrect (it says 1893) but at least her baby son's name is correct and it is a pretty stone located near her two sisters.