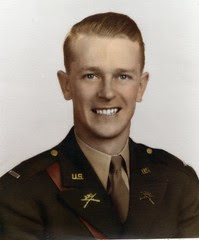 Capt. Thomas H. Broadfoot
Originally uploaded by midgefrazel
Yesterday, I decided to start recording information about my father's service to our country in my genealogy database. I pulled out the folder where he kept his military papers and went through them one page at a time. It didn't seem like I was going to gain information, but I did.

With the help of my husband, I began to decipher the military lingo. My father enlisted on 19 Nov 1940 as a Warrant Officer after graduating from Westerly [RI] High in 1935 and working as a textile worker in the Bradford Dye Works. [Bradford Dyeing Association] At enlistment he was 23 years and 3 months old. He was blonde, blue-eyed, of fair complexion and was 5' 9" tall and weighed 129 lbs.

He went to OCS [Officers Candidate School] in Fort Benning, GA and received a certificate (Form 55) from Major John G. Hardy after serving as a Corporal, Second Company and accepted an appointment as a 2nd Lieut. His ASN [Army Serial Number] is listed on this and later documents.

In Germany, he was awarded the Oak Leaf Cluster-Purple Heart on 22 Sept 1945 for wounds received in action on 21 Dec 1944. I think this is when he became part of Co. G, 32nd Airborne Division and was promoted to 1st Lieutenant.

Tom, wrote a letter to the editor of his hometown newspaper, The Westerly Sun, thanking them for sending him the paper In this he indicates that he is now a member of Co. F. one of his dogtags is in the envelope along with a charming photo of his local baseball team. They all look so young.

They all looked so young didn't they. I will have a full posting on my blog tomorrow regarding my military family history. Some of them look 12 years old! Thank you for sharing your story.