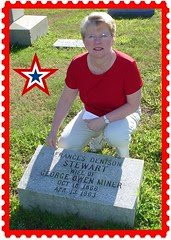 On August 8, 2004, I went gravestone hopping to locate the resting place of Frances Denison Stewart, my great-grand aunt, daughter of Dudley Wheeler Stewart and his wife Eliza Fish Denison. Why, would this be important? Well, because she was the last woman in my family to belong to the DAR.

Earlier that year, I submitted my application following her line and was it was approved on July 11, 2004. As she was my grandfather's favorite aunt, he gave my mother her name, Frances, as her middle name.

As a small child, I went to visit this woman, probably in the last years she lived in the house built by her husband's father who was Thomas Avery Miner. It still stands today and has been restored by the present owner. I remember the "big stairs" and the horse chestnut tree outside. I met her in her bedroom as she was bed-ridden. My mother made me wear a "party dress" because I was told that she did not approve of women who wore slacks.

As I was researching our shared ancestry, I queried the DAR Chapter in the Groton-Stonington area and talked on the phone with a woman from her chapter that actually knew her for many years. When I told her about meeting "Aunt Fannie", she laughed and said for sure my memory was correct. She was ever the lady and had very strong opinions about many topics including the issue of women wearing slacks. In a true gesture of DAR, the chapter helped me locate her grave, giving me driving directions and a very good sense of where the plot was inside the gates. She is buried in the Starr Burying Ground in Groton, New London, CT. I'd like to go back there, as there are many interesting gravestones in this beautifully kept cemetery.

Fannie married well. Her husband was George Owen Miner, whose ancestors go back to Thomas Minor, one of the founders of Stonington. [I have two direct lines back to Minor besides this collateral line.] Fannie had only one child, Owen Stewart Miner, who died in 1972. Fannie was widely known as Grama Miner and was very active in her community just as her mother Eliza has been before her. I think she would be pleased that I chose to follow her into DAR membership.

Great-Aunt Fannie lived to be 96 years old, another strong willed woman who lived past 90 in my family. I curtsy in my skirt in memory of her.

She died 11 days before I entered the world!

Great DAR story Midge, one for "American Spirit" perhaps? You should submit it to them.