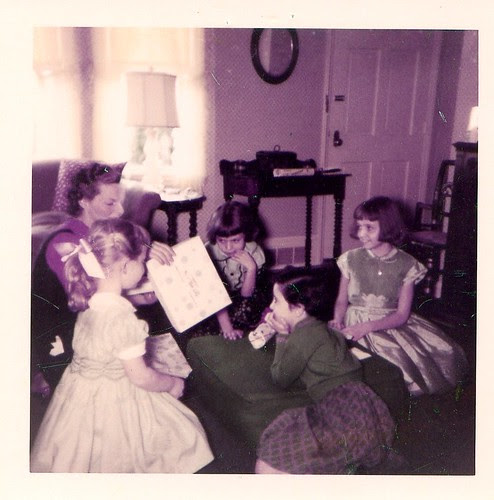 Birthday Party [Dec. 1954], a photo by midgefrazel on Flickr.

As I have been researching, I have remembered so much more about the people in the neighborhood. Of course, you recognize me as the pony tailed girl, and my mom, who is reading the story to the party guests in December 1954. The little girl to my right with the darkest hair is Jamie Nero, then Linda Worcester Chappell and the little girl next to my mother I now remember as Carmella Santilli. Carmella is the little girl whose family moved out "in the night" and I was devastated. We know, because of this photo it was probably in 1955 when that family moved away.

Jamie Nero's father was a elected state representative and then a senator and is listed in the 1956 City Directory as a teacher. He was a teacher of music and helped me with violin lessons. I can remember that her name was Jamice, which I think is the female of James in Italian. She was a sparkly little girl and we often played at her house because she had a nice fenced in back yard and a cement patio that was we could sit on and play with our dolls. They were a Catholic family and I helped her memorize what she needed for her First Communion. I think she went to parochial school.

My mother loved parties and I did not. She did tell me about the parties that the adults had in the neighborhood when I was quite young. I was probably overnight at my grandparents or had a babysitter. The grownups called them "House Parties" because they didn't go to a club or restaurant. Her favorite was the one where some man did magic tricks. He actually levitated a guest and hypnotized another. That hypnotized man was told to take his jacket off and put it on inside out. He was asked to tell the audience of guests what his name was from the tag on his jacket. He read the name "Robert Hall" which was a men's clothing line. When the man snapped his fingers and the trance was finished the magician asked him what his name was again and he replied without hesitation, "Robert Hall". My mother thought this was hilarious and that was what, for the rest of his life, he was going to reply. I wondered how much alcohol was served.

Such was grownup life in "The Plat"!