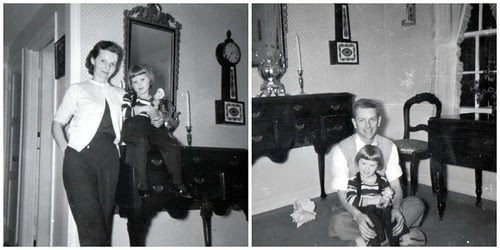 Dining Room Collage, a photo by midgefrazel on Flickr.

It must have been a boring winter. It seems that I have a lot of indoor photographs and outside snowy ones during the early years of the neighborhood. My mother preferred for me to play in the front yard because the "inmates" at the Rhode Island prison and farm had not put up the fence between the land for the farm and back of Hill Top Drive. So many people wandered away, that she called the police all the time forcing them to fence their property. Nothing bad ever happened. Many people were "mental patients" and probably had dementia. It was called the State Prison at Howard. Howard is the village name.

Rhode Island's city and towns are still identified by the villages that comprise them. Many are named after the surnames of the people who first lived there.

One famous one in Cranston is the Oaklawn Village where the Quakers and the Baptists lived. I bought an Images of America book about Cranston and it is a great visual read. I have learned a lot about my home town. You'd think I know all this. I didn't.

Cranston is in Providence county. The current Web page tells me Cranston was incorporated on 10 March 1910 as a city and in the 2000 census had a population of nearly 80 thousand people in 31 thousand households. It was settled in 1636 and was a town by 1754.

My neighborhood was finished by then and so was Garden City. Many people had moved away and a second family had moved in.

In the above collage, please notice the puppet I am playing with. It was advertised on a Rice Krispies box. It is Snap (or Crackle or Pop)! I now eat this same cereal because it is gluten free. Who could have predicted that?