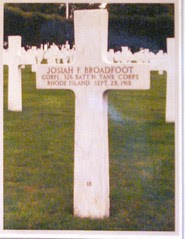 Josiah F. BROADFOOT
Originally uploaded by midgefrazel
Last August, I read about a free service that was being offered to families that have military men and women who lost their lives in battles overseas. Many brave people who died on the battlefield are buried in American cemeteries in other countries. If you have one of these, check this Web site to see if your ancestor is included. If you would like to see a photograph of their grave markers; then you can request that a photo be taken by using a form on this Web site.

I mailed my request, along with photos of the memorial grave for him, last August. In October, I received a letter telling me that they had contacted the people in France and that I would be receiving the photograph. I requested two copies so that I could give one to the superintendent of the cemetery for the office, as the school children of the town visit graves as part of their curriculum work. I take a lot of photos in this cemetery and I am looking forward to sharing this with them. The huge envelope with both photos came yesterday on Decemeber 11.

It is a very large color lithograph of the cemetery with a small "wallet sized" photo of the grave marker in the right corner. I snapped a photo of that section as it is too large to fit on my scanner. That's why it is a little bit unclear.

I will post more about Josiah with the memorial grave that I took in his hometown.

There are no known photographs of Josiah F. Broadfoot and no one in my family has the distinguished service cross.

Wonderful post. This is a great service for those with loved ones and ancestors buried in other countries. Thanks for giving the information needed to pursue this.