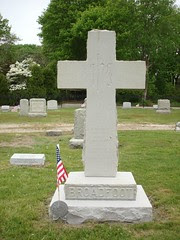 Josiah BROADFOOT
Originally uploaded by midgefrazel
This is the memorial cross for cousin, Josiah F. Broadfoot, World War I hero buried in France.

Corporal. Broadfoot volunteered to drive a tank, and, his services being accepted, he attacked enemy machine-gun nests until his tank was put out of action, destroying several enemy nests which had held up our infantry. He then continued the advance on foot until he was fatally wounded.
General Orders 89, W.D., 1919
Home Town: Westerly, RI

Buried in Meuse-Argonne American Cemetery in France, this is a memorial stone for Josiah who was my 1st cousin, 2 times removed. This monument is at River Bend Cemetery in Westerly, Rhode Island.