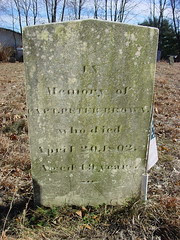 I am hoping that I will be able to find out more about Capt. Peter BROWN, who is buried at Whitehall Cemetery #21 in Mystic, New London, CT. Capt. BROWN served in the American Revolution and is buried in the same cemetery with many other men who served in this war.

Peter was born in 1753 [calculated from his gravestone date] and died 20 Oct 1802. Probably he was born and died in Groton, Connecticut. He is listed in Grace Denison Wheeler's book, "Old Home of Stonington" on page 258 but he is not listed in the BROWN family in Grace's father's book, "The History of Stonington".

He married Mary ELLIOTT, who married Nehemiah GALLUP (1751-1843) after Peter's death, on 17 Feb 1782. Peter and Nehemiah served together in the Revolution and perhaps they were friends. When Mary, who was also called Mercy, died, he was buried next to her first husband, Capt. Peter BROWN. He gravestone is a favorite of mine and I will blog about her for the next Graveyard Rabbit Carnival.

All that I know about Capt. Peter BROWN is that he did not hold the rank of Capt. during the years he served and so he may have been called Capt. out of respect or maybe he was known as a sea captain. I do not know who is parents were but I do know that he had a daughter named Catharine/Catherine who married Jonathan DENISON [#1561 p. 54, 102 Denison Genealogy] in 1802.


[photo by Fred Burdick, used with permission, all rights reserved]

I have at least one Revolutionary War veteran in my Gamble family, but no one knows where he is buried. It is assumed that he was buried on the family farm as was the custom then.

Good luck in your search for more information on "Cap't Peter Brown".

How fun to find a cemetery with multiple Revolutionary War Soldiers. I live in a part of the country that wasn't settled until 1823 so not too many Rev.War Vets made it here. There are a few, so maybe I need to track their graves down.