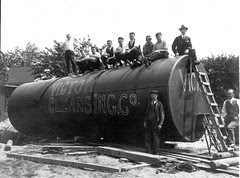 Victor Cleansing Co.
Originally uploaded by midgefrazel
15th Edition of Smile For The Camera is "they WORKED hard for the family."

This massive tank must have been for the fuel that was stored at the laundry and dry cleaning plant operated by my grandfather, Evans Stewart, in the late 1910s, the 1920s and the 1930s. This photo was shared with me by Jim Ricci whose grandfather and grandfather's brother worked side by side with mine. I think this is a very unique photograph, don't you?

I would not be surprised the tank was lettered and the photo taken for the Providence Journal! [the major newspaper of Rhode Island still to this day] My grandfather, always seen in a dress shirt with vest or a jacket and tie, never liked to get dirty.

I certainly would like to know who the old man standing in front of the tank was!

Trust me, the people who worked at Victor Laundry and later at Victor Cleansing Co. worked hard. Inside the "plant", as we called it, was HOT beyond words. But, these people were employed even during The Great Depression. It was honest, steady work. Many of them were immigrants struggling to make a living in America. They were always nice to me, especially the truck drivers, the ladies of the sewing room, and the office workers. I remember the chatter of the women while they worked and Max, the tailor, who let me try on the fur coats. I think they would be amazed at how much I remember.

I have enjoyed working with the Westerly and Providence RI City Directories, looking for the listings for the business and the ads. As the business was started by my grandfather's father, Charles Stewart, these ads go back as early as 1892!

I agree...great photo and story. I can't even imagine how hot it must have gotten. They really earned their salary.

I enjoyed your story. As I was hanging some things to dry in my laundry room, I became curious about an old wooden hanger that had the words "Victor Cleansing Co" on it and decided to look it up on my computer. It must have been my parents and I've used it almost daily and now I have a new appreciation for it. Thank you, B Toro (California)

Thanks for your comment. I am still working on the blog posts for my family business and these comments are very motivating!