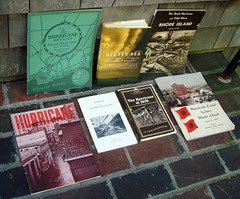 Although no one in my family was killed, many were in the surrounding communities of "South County", Rhode Island. [Memorial rock in Westerly in previous blog post]

Every year, probably forever, native Rhode Islanders, stop and think about the hurricanes that plague us in these the summer and fall months of May through November. No year is safe.

Most people who remember 1938 are gone (except for my in-laws who are in their 90s) but people still talk about this in my native Rhode Island as if it was yesterday.

I clearly remember "Hurricane Carol of 1954". It was exciting to me until we went a few days later to the beach and I saw the thundering surf for myself. I am still afraid of the water.

Before I could compost this blog posting, twelve people have already looked at this photo of just a few of the books I own about this hurricane. [That amazes me!]

Historic news footage is widely available on the Web about "The Long Island Express" that roared through New England in September 1938. Don't blame me if you can't sleep after viewing that video.

Without our modern weather forecasting, we too, would be dead from disasters like this.

Last spring, I listed to the audio book, The Great Hurriane, by Cherie Burns after my husband had read the printed book and highly recommended it. I found it absolutely fascinating and horrifying!