Papers and the Case of Beer

My dad used the drawer in his workbench to store his special papers. It was something I knew and so when he died, I went down to the basement and looked in the drawer. There was a packet of papers about the house. I looked them over and put them back since my mother was still living.

When she died a few years later, I went back and pulled the packet and put it in my tote bag to take home and review. My dad did a great job of keeping things together. He hid a case of beer behind the bench. I missed that. But, it made me smile just recently when I asked Stephanie questions about the house. 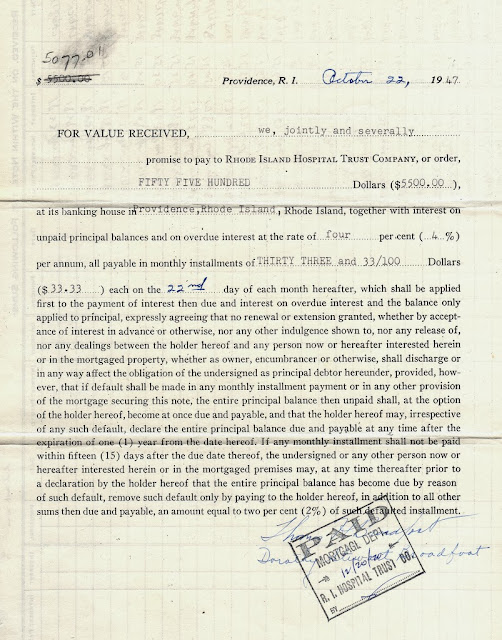 In the packet was the mortgage papers. The date at the top of the paper was an eye-opener. Mom told me that she moved in in September (and I was born in December). Now it looks like she was a month off. Maybe I am more prematurely born that I thought?

Of course, the amount of money the house cost is amazingly low. I know my grandparents picked out and paid the down payment on the new house. My mother wasn't showing any signs of moving out from her parents' home after the wedding. She longed to be pampered her whole life.

I also learned my father took years to pay off the mortgage (1970) and so that is why he told us we would never pay off our house in his lifetime. Because I worked and contributed to our income, my Dad was wrong. I called him the day we paid it off. There was silence on the phone. He was stunned! My mother not working (she had the college education) held my parents back. She always complained about not having enough money.

Your parent's lives are so interesting in retrospect but not as you are experiencing dealing with them. For all of you with living parents, you will find this is a strange idea.

By the way, this dates a Kodachrome slide photo in my parents collection. I think now that it IS the day the moved in. Late October, 1947.