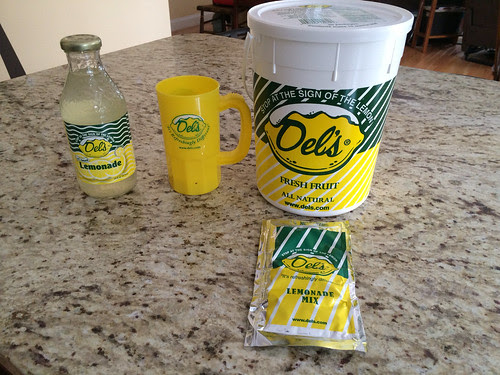 As all Rhode Islanders are, I am obsessed with anything Del's. (It is frozen lemonade. It is a little different from an Italian ice.)

Perhaps more so because I knew Mr. Angelo DeLucia, founder of Del's and his first stand was an icon at the second entrance to "The Plat". He was the nicest man. I used to get my first Del's each year as soon as the stand opened.

One year, I paid for my Del's with a quarter. Mr. DeLucia handed me my Del's and two dimes and a nickel. I looked at the change and looked up at him and he was smiling and winked at me. I thought it was weird that he just didn't say that the first one of the year was on the house! I thanked him, pocketed the change and walked my bike off onto the road. I couldn't drink my Del's and ride my bike at the same time. I have no idea if he did that for all us kids. I was very sad when I learned he died and I put his obituary in my family Bible.

During the winter, the stand closed and there was a sign that read, "Had to close before we froze, see you in the spring when the crocus grows." We plant crocus bulbs in memory of Mr. DeLucia. I love when they first come up because lemonade season is here.

The "liquid" Del's in the glass bottle we bought locally. It isn't as good but it is fun to look at. My doctor and his wife are both native Rhode Islanders and I gave her a bottle. I thought she was going to leap off her chair when I told her I bought it in Sudbury, MA not far from the office.

One Christmas, I bought a Del's roll as a joke gift for my son-in-law and snuck it into his freezer with a clue at his breakfast plate. It read "It's sunny and yellow, a Rhode Island delight". Later that day, my daughter called me to tell me he was going to need an intervention because he kept going to the freezer and slicing off "just another little piece". My son-in-law has Italian ancestry.

If  you aren't a Rhode Islander if you don't know about Del's. It is a story of another Italian immigrants' success. I imagine Mr. Melocarro and Mr. DeLucia toasting with heavenly Del's. I am sure my neighborhood grocer is involved too. You'll learn about him in a upcoming post.

I LOVE Dels lemonade. I grew up in Rhode Island and drank it every summer since it was only available in the summer. Now I buy the powdered version and have it here in Florida.

After hot school days, the first place we headed was the Dels truck parked in front of Classical High School. I think it was 35 cents for the frozen lemonade. Yum!

Midge I found, when I was having a party, that the powdered Dels mix you are showing, in a blender with water and ice, was surprisingly like the real thing.